We are a Welcoming Congregation, recognized by the Unitarian Universalist Association. This means we affirm and include people who are lesbian, gay, bisexual, transgender, and queer at every level of congregational life—in worship, in program, and in social occasions—welcoming them as whole people.

As a Welcoming Congregation we have pledged to:

Congregational Conversation on Gender Identity/Pronouns was planned for March 2020 and will be rescheduled for a later date. Many at CVUUS are unfamiliar with the evolving language and understanding of gender identity as a spectrum and the importance of personal pronouns in this context. CVUUS aims to explore this with the help of the Center for Emerging Adults. This training and our other LGBTQIA+ efforts will help qualify us for renewal with UUA as a Welcoming Congregation. We encourage you to use the Gender Unicorn worksheets and pronoun stickers found with our nametags as a useful ally move.

CVUUS hosted QUEERIOS, a Friday afternoon drop-in time for LGBTQ youth and youth allies during the school year in our Fenn basement a few years ago. This could be revived.  Adult chaperones are needed and welcome to comply with our safe congregation policy of having two adults with youth groups. Two of our adult chaperones have recently moved out of the area and we’d love to have more people on our list of more or less occasional hosts.  If you’re interested, please contact Jordan Young – jordan@gurus.org

Meanwhile, a new CVUUS group addressing the needs and interests of LGBTQIA+ and questioning folks has formed and gathers for monthly potlucks in our Fellowship Hall.  Jordan Young or Ollie Cultrara (ollie.cultrara@gmail.com) can provide more info.

Our buildings include gender neutral bathrooms and wifi access.We look forward to knowing you. 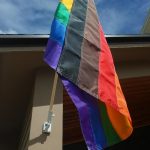